Kew Palace (London) – A Royal Residence once upon a time

Part of the famed Royal Botanical Gardens of Kew, in London, the Kew Palace is actually one of the Royal Palaces in use by the British Royal Family, though it now opened to the public as a museum.

Originally constructed a private manor by a Dutch trader, Samuel Fortrey in 1631, it was called the Dutch House. Later on King George II and his wife, Caroline lived here while King George was extending the Richmond Gardens. In 1781, their son, George III, who moved his extended family here, purchased it.

The building, which is noted for its distinctive, decorative carved brickwork and rounded gables, is constructed in what is known as the Flemish Bond style with bricks arranged with sides and ends alternating. The front entrance, which is gabled, gives a house a very ‘Dutch’ appearance, but later alternations have changed certain original installations especially the original sash windows.

In 1818, when the lady in residence, Queen Charlotte died, Kew palace was closed down. In December 1896, the palace was included into the Kew Gardens properties, with the consent of the then monarch, Queen Victoria.

In the 1960s the Queen Gardens were constructed by then Director Kew Gardens, Sir George Taylor, in 17-century style that includes only those plants that existed in that era.
Administered separately by the Historic Royal Palaces department, the palace recently underwent a major restoration and was re-opened to the public in 2006 like many other royal palaces.
Posted by Arsalaan at 8:19 PM 2 comments: 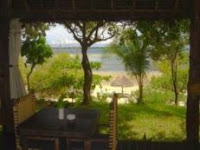 Mafia Island is a cluster of islands, one major island and numerous islets. Apart from the main one, only a few islets are inhabited, with approximately 41,000 locals calling these islands home. Many of which are fisherman and others subsistence farmers cultivating various spices.

With its deep-water anchorage and numerous sandy beaches, the Mafia Island cluster is an excellent place for scuba diving, game fishing and other water sports.

For all those thrill seekers and active gamer fishing enthusiasts, these islands provide the ultimate experience. These visitors on arrival can find these great accommodations: