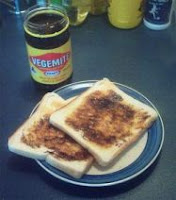 Australians are very fond of their ‘bush tucker’. Bush tucker is associated with food cooked outdoors either on camping sites or at out-of-station trips.

These usually include cooking or rather, barbequing meats of their iconic animals such as Kangaroos, Emus (a flightless bird), Barramundi (fish) and yabby (crayfish).

The famous Aussie slogan, ‘Let’s put on a barbie’, cannot emphasize their love of cooking outdoors anymore than this.

Then there Vanilla Slice (a custard pie slice topped with vanilla icing); Lamingtons (pieces of sponge cake coated with chocolate and any other flavoured icing and coconut); and Peach Melba (slices of peach served with whipped cream and sometimes with a scoop of ice cream).
Posted by Arsalaan at 11:06 PM