The many attractions of ancient Cusco, Peru 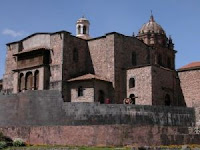 Some of these are:

Sacsayhuaman: This ruined complex of a military fortress dating back to the Incan civilization is a marvel of construction. It is composed of large boulders, some weighing more than 300 tons each, fitted together without the use of cement.

San Blas: This is an old living area of Cusco, that is home to narrow and steep streets, colonial-styled houses and various art workshops.

Santo Domingo Church (Iglesia de Santo Domingo): This is a 17 century church which is located on the site of the Incan’s Temple of the Sun.

Temple of the Sun (Coricancha): This ruin was once the most important temple of the Incas, which was later used as a base for the Church of Santo Domingo when the Spanish plundered the city.

Cusco Cathedral: This magnificent renaissance-style, 16 century building is built in the shape of a Latin cross and contains about 400 colonial paintings including the famous ‘Last Supper’ by Marcos Zapata. It dominates the skyline of the Plaza de Armas.
Posted by Arsalaan at 11:52 PM