Malmo Castle - Last of the Scadanavian castles of the renaissance 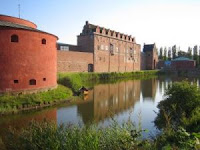 One of the oldest renaissance castle left in this part of the world (Scandanavia), Malmo Castle was originally constructed as a citadel by King Eric of Pomerania in 1434.

Later in the 16 century, it was demolished and rebuilt in the newer style by then King Christian III of Denmark, as the area was part of the then Kingdom of Denmark. For many years after that the castle remained a stronghold of the kingdom, defending the land against foreign aggressors.

Malmo Castle also once served a prison, with one of its famous inmate was the Earl of Bothwell, third husband of the Mary Queen of Scots, who served a prison sentence of 5 years from 1568-73.

Surrounded by moat and lots of greenery, Malmo Castle is now ‘serving life’ more as a museum than a prison fortress. Currently it houses the Art Museum, City Museum, the Natural History Museum, Aquarium & Tropicarium, and the Konstmuseet.

The latter one contains one of the largest collections of old Scandinavian masters. It also houses a large Russian painting collection dating around to 1900 – the largest outside Russia.

Located in the western side of the city of Malmo in Sweden, Malmo Castle is easily accessible by anyone wishing to visit it. It lies west of the area of Stortorget, the castle can be easily reached on foot.
Posted by Arsalaan at 11:10 PM