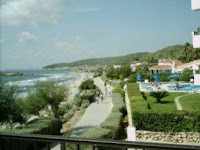 The lesser known but equally famous, Minorca Island is the second largest of the Balearic Islands, the autonomous island group of Spain.

Famous for its many pristine beaches, both of sandy and rocky nature, as well as several sites of prehistoric, monolithic stone monuments, it isn’t require any sense of brilliance as to why this small island (only 15 km wide and 52 km long) is chock-a-block full of visitors all-year round.

With over 60,000 permanent inhabitants, Minorca plays host to a half a million visitors every year. But even with such large numbers, it is not as overrun by them as its nearest neighbours, Ibiza and Majorca are.

Apart from its beaches, there are various sites and monuments for those interested in history, archaeology, music and art. It also has a great nightlife too.

For all those thinking of making a beeline to Minorca, can stay in either one of these hotels: