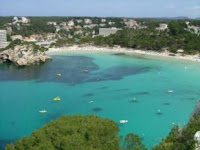 One of the major tourist attractions in the Mediterranean Sea is the island of Minorca.
Part of the greater Balearic Islands group, Minorca belongs to the Spanish nation and lies not far from another of Spain’s island attractions – Majorca.

The name, Minorca comes from the Latin term, Minorca, meaning small or not so significant. The name corresponds with the size of the island, as it is just 15 km wide and 52 km long.

Though, it is the second largest of all the Balearic Islands, Majorca being the larger one, it is the most beautiful of them all. With miles of beaches, it has more beaches, than those of Majorca, Ibiza and Formentera combined. These beaches range from miles-long silver or golden crescents of sand to rocky bays.

The island itself is a set on a rocky bluff, overlooking an ancient port, which was a reason that saw French, Spanish and even British fighting over the island, and hence, for the control of the Mediterranean region (the island lies near the entrance to the Med. Sea).

Minorca Island is famously known for its large collection of megalithic stone monuments, including navetes, taules and talaiots that speak volumes of its early, prehistoric human settlement.
Though, tourism is a major industry at this island, it, unlike its nearby neighbours it not completely dependent on it. It’s other industries include leatherwork, costume jewellery production, dairy farming and gin manufacturing.
Posted by Arsalaan at 11:01 PM